It’s a few kilometres from Chesterville to Saint-Christophe d’Arthabaska, then some 50 kilometres more to Saint-Pierre-Baptiste in the Centre-du-Québec region. This is the path Dany Fortier takes most days as he tends to his maple operation. “Sure, it’d be nice to have it all in one stand, but you don’t always get what you want,” says Dany, with determination.

CHANGE OF PLANS
Newly graduated from the Institut de technologie agroalimentaire de Saint-Hyacinthe, Dany had life figured out: he was going to be a dairy producer on the family farm. And that’s what he did for a few years, until the calendar turned to Y2K. Thinking and talking it over with his extended family, he decided his future was elsewhere. Financed by his years in dairy and supported by his parents, Dany bought a maple operation.

In the summer of 2000, Dany and spouse Isabelle were the new owners of an 8,000-tap sugar bush east of Victoriaville. It was tough at first, with low yields, equipment to be replaced, and heavy spring snows. Looking back, Dany thanks Isabelle for keeping them going, making sacrifices when they needed to. By 2005, yields had improved and Dany was able to take on maple production full-time. Today, they operate 11,000 taps.

FAMILY IS EVERYTHING
Isabelle joined the company full-time in 2016 as its administrator and their sons, Anthony (22) and Guillaume (19), round out the staff. Dany proudly says, “My boys have jobs of their own but they’re always here on their free time and in the spring, tapping and fixing leaks. It’s all in the family!”

TAKING THE NEXT STEP
In 2012, the regional administrator decided to step down and urged Dany to take his place. “I was 42 years old and the kids were a little older, so I had some more time on my hands,” he remembers. “And I really caught the bug to do more. I could relate to what other producers were doing, that there were better ideas out there.” Since 2017, Dany has been president of the Centre-du-Québec region, growing into the position as he went along. Observers say the support of the organization’s administrators made the difference. They continue to back him today, and it certainly helps that Dany is a devoted team player. That’s what it’s all about for him: “The president is not better than the administrators. The president is better because of the administrators and a good manager.” And he sees involvement in the organization as being even more than helping the industry’s development: it’s a chance to socialize with fellow producers as well. 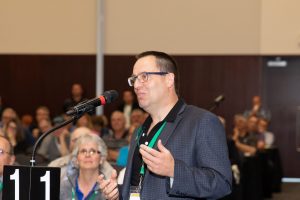 “At the end of the day, there’s a sense of satisfaction that we’re actively taking part in the future of maple production.”