Go to the rural municipality of Hérouxville and you will find the maple operation called Parcelles de soleil, roughly translated as “Place in the Sun.” It was there, in 1995, that two new graduates of the agriculture school in Saint-Hyacinthe, Éric Bouchard and Isabelle Thiffeault, bought his grandfather’s land. Their dream was to keep up the family farming tradition, including 1,000 maple taps. “At the beginning, we wanted to grow vegetables and did that for many years. But, with 6 kids, we decided to go all in on maple production and processing.”

100% of production goes to market
What sets Parcelles de soleil apart is the diversity of their products found in at least fifteen grocery stores in the Hérouxville district. Éric and Isabelle turn their sap into an enormous range of consumer goods, from marinades and vinaigrettes to popcorn and hot chocolate, and soon, their own maple dulce de leche. That’s on top of the maple syrup, butter, taffy, sugar, and candies, of course. “After the Christmas season,” says Éric, “Isabelle and I get into processing mode right away and full-time, until March. It’s a lot of work but we want to get all our production out onto the market.” 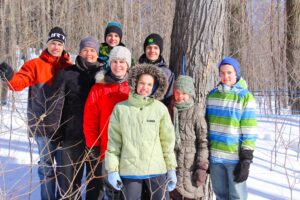 the family way
Éric and Isabelle now manage 3,200 taps, with the acquisition of a second stand of trees at Saint-Prosper-de-Champlain, in partnership with two of their sons, Guillaume and Jonathan. “We wanted to get the kids involved in the business.” For them, maple means strong family bonds. Éric laughs when he recalls how they did it. “We had a promotion system. When they were 6, they carried the batteries and, at 7 or 8, they had to make tracks in the snow for me. Later on, they were allowed to take out the taps and, after that, they could use the hammer. That was pretty important and training was mandatory!”

“What has motivated me all these years and still motivates me today, it’s seeing people who are as passionate as I am and being able to talk with them about how to make things better for all of us.”

the next generation
“We all have things to learn, old foxes and young wolves alike,” says Éric, meaning that young people wanting to be involved should be welcomed both out in the field and in the office. He agrees with the wisdom of having a seat for a young entrepreneur on all regional maple organizations. “They need to be involved today because they are the agriculture of tomorrow.” Taking ownership now means they will recognize their decisions in the future.