Francis Roy is a man on the move. Especially when winter begins releasing its grip in the Beauce municipality of Saint-Côme-Linière. That’s when he and his business partner/brother-in-law Dominique Pépin clock a lot of time on the road between their seven(!) sugar bushes at Saint-Louis, Saint-Zacharie, Sainte-Aurélie and Saint-Côme. They also operate a support service for maple producers and a bush-clearing business, employing eight people full time. 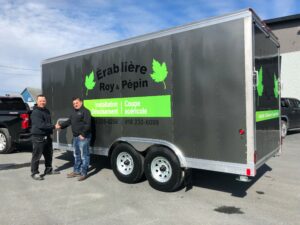 It was 2008, and Francis was getting tired of working jobs in construction and at the plant. He and his buddy liked being out in the bush, so they bought the 28,000-tap operation belonging to Dominique’s dad. He was just 23 years old, and now his own boss. Well, not completely. They kept their day jobs for the next two years. “Dominique worked at the plant all week and in the bush on weekends. I’d do it the other way around. We’d trade off,” Francis remembers. With the energy and ambition of their youth, they bought another 5,000-tap operation a few months later, then continued acquisitions every 2-3 years. Today they manage a total of 72,000 taps, certified organic. 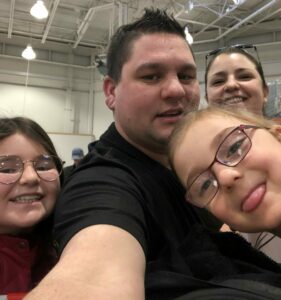 Four years into his career as a maple producer, Francis faced a personal challenge: his second daughter, Anna, was born prematurely, at just 27 weeks. And it was sugaring time. The sap was flowing, and he and life partner Marie-Michèle were constantly caring for the baby and 4-year-old Julia. “I’d leave the sugar bush at night and drive an hour to the Centre des grands prématurés in Quebec City. In the morning, it was back to the boiler. But I didn’t feel tired at all,” he says, a little surprised by his own resilience. The energy came from his love of the work, the drive to succeed, and all the support he got from his brother-in-law and whole family. “I really learned how important it is to have a solid relationship. And a good partner.” 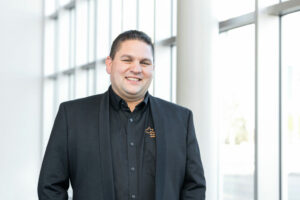 “The best part of being the chapter president is that I always know what’s going on. Producers call me or text me on Messenger every night. I hear what they have to say, and pass it on. I see myself as their ball-carrier.”

He’s been involved with the chapter since 2014 (when an outgoing board member suggested he take his place) and president for the past two years. Francis says young producers will get involved if experienced producers take up mentorship roles. “People don’t usually just stick their hands up and say they’ll do it. Young people need the encouragement. And they need to be part of the decision-making.”