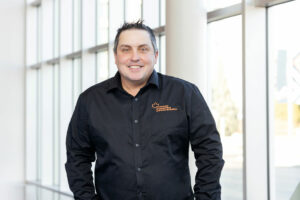 “Oh, I just hate spring. Winter is over but it’s left everything dead. My dirt road is sheer mud and, when you have six kids, that’s not a good thing! But knowing it’s sugaring time, that nature is coming alive and summer’s around the corner helps me accept it all.”

So says Jonathan Blais, an authentic, plain-spoken man, describing his unique take on living as a maple producer.

Four generations of the Blais family—Wilfrid, Englebert, Léo, and now Jonathan—have called this place home. Four generations rooted in the Eastern Townships municipality of La Patrie, passing from hand to hand a proud maple-producing tradition. The farm family of Jonathan, his wife Amélie, and their six children live in the house on land cleared by his great-grandfather Wilfrid Blais. “My grandfather Englebert and my dad Léo were born right here! From them I inherited my love for maple syrup,” he says with visible emotion. His memories travel back to when he was a little boy following his grandfather everywhere he went. “I still remember smelling and tasting his boiled sap. I couldn’t have been more than 4 or 5 years old.”

He’s now in his mid-forties but Jonathan’s been a maple producer for some thirty years. At 17, he started out as a dairy farmer and, before even completing his training, he bought a farm. Ambitious and determined, he had help from his dad in managing his first maple operation. In 2008, he practically doubled production. Today he manages 27,000 taps on public and private land with the hope that his children will follow in his footsteps. “For them to be able to make a living at it, I’ll have to expand. There’s six of them and I’d like to keep them all around here. But it takes a lot to support a family in agriculture. That’s why I jump at every chance to add taps.” 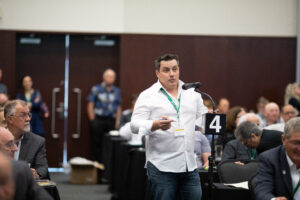 His dad taught him about how important it is to “take a stand”. When he was a teenager, Jonathan was doing the chores with his mother and asked her where his dad was always going. When his dad returned home, he said that he’d been to Ottawa. “Today we took a stand.” That was the day Jonathan learned the concept of solidarity, strength in numbers: that farmers had to take command of their own destinies so others wouldn’t decide it for them. That resonates with him today, even stronger than ever, on his behalf and those of the youth in his region. “I didn’t become a union man. I was born a union man!” In 2020, he didn’t think he was ready to become president of his regional chapter in Estrie. But he did it, motivated as much by injustice as he was by nearby producers selling their syrup on the black market. “They threatened me, but I felt it was important to speak out about it and call them out. I knew how tough it had been for my father and others, so I was ready to go to war.” Another theme driving his presidency is paving the way for the next generation. “In our region, we have to make room for young producers, to preserve the resource, and create opportunities for them. They should be able to realize their dreams of becoming owners and entrepreneurs here at home, not just labourers.” 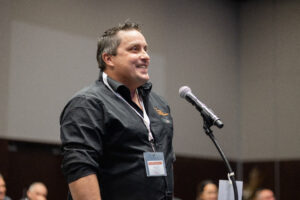 “The greatest politicians lead people by getting them to wake up and stand up. They are my inspiration,” says the president of the Estrie regional chapter of Québec Maple Syrup Producers.