“Maple syrup’s not just something sweet. The flavour is what it’s all about to me. Without that, it loses all its charm,” according to maple producer Juliette Grégoire from Saint-Esprit in the Lanaudière region.

For 35 years, Juliette and husband Pierre-Paul Légaré have owned and operated Ferme Légaré et Grégoire, now with 4,400 taps and production that is certified organic. Back in the 1980s, when the couple acquired their sugar bush, it was a hobby for the joy of it. “A hobby was all it could be because the price of syrup was so low,” says Juliette. And the economy wasn’t great either. “We really didn’t know, from one year to the next, what the raw product would be worth, so we put everything into processing. I thought that would give us more stability.” Hungry to learn, Juliette took every maple production course out there, eventually leading to her becoming a master in the craft and a judge in competitions.

IT’S ALL A MATTER OF TASTE

Juliette has a developed taste for maple syrup. She still submits her products into competition in the pursuit of improvement. “When you have your syrup tasted, it pushes consistency and identifies any problems with your product and processes. It’s great when we rank highly but I also want to know when there are problems.” She knows that the new generation of maple producers is sensitive to flavour quality, and “I encourage them to come up with something good, to always be tasting their syrup. That way, consumers will know and want what they have to offer.”

Working in the bush, running the concentrator, turning maple sap into product… Ask Juliette what she likes best about her work, and she replies: “Putting my snowshoes on and going out. And pleasing people with my products—that really makes me happy.” These are the simple joys of a woman who feels it’s a privilege to work in nature while raising five kids and operating a business. From her first springtime as a maple producer, there was nothing stopping her. How did she manage it, even while pregnant? She laughs, “I’d be out tapping trees with my hands on the tools and my belly out over the snowshoes!”

STANDING UP FOR SMALL PRODUCERS

Juliette wanted to help fellow maple producers do better and went to organization meetings, becoming an administrator in the 1990s, urged on by the local president at the time for Lanaudière, Rolland Urbain. She hasn’t stopped, giving her time so that smaller operations like hers are heard at the decision table. 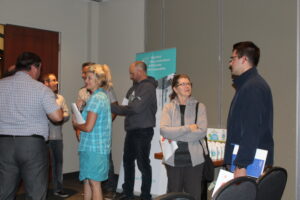 “It seems like it’s all about the mega-companies now but there has to be room for the little ones to start up and grow. We have to speak up!”