“I’ve never tried to force things to happen,” says the owner of Érablière Le coureur des bois. “Everything always seems to fall into place.” And that’s how life brought this native of Témiscouta to maple syrup.

He was only in his early twenties when Justin set out on the path, but even he didn’t know how long it would take him to get to where he was going. Helping out on his uncle’s sugar bush, Justin completed his studies in forestry technology and, in 2009, applied for his own quota for a sugar bush on public land. Unfortunately, that attempt failed and, though greatly disappointed, he kept faith that he’d achieve his dream some day. When he did land a quota, the path turned rough once again. He won’t every forget his first spring as a maple producer, in 2012. “At the end of March, we had 7-8 days of 25-degree highs. I was brand new to the business and I didn’t know what to do. So many problems… It was hell!”. He got by with help from the former owner.

all in the family

Visit him today and you’ll find him with wife Lise and children Laurence (16) and Émile (14) on their 28,000-tap operation at Rivière-Bleue, a tiny municipality in the Bas-Saint-Laurent region near the New Brunswick border. 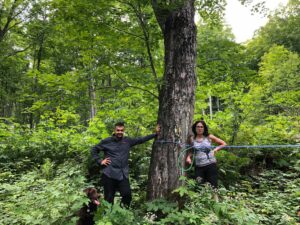 Family means everything. “On weekends, the kids are always with us, and they love the work,” says proud papa. “They help with everything they can—changing the osmosis filters, washing the tanks, re-setting the presses…”  Lise has taken over the boiler, leaving more time for Justin to do what he really likes: working in the bush. A significant problem remains, not only for their maple business but for all types of entrepreneurs in the region: the labour pool. He’d love to expand capacity but wonders who can step up to do the work. “Looks like I’ll have to go with foreign workers. Guess I’ll have to learn Spanish!” he says with a smile.

Justin was just two years into his business career when he took on the administrator position for the maple region. He saw it as the chance to learn about the supply management system, which baffled him at times, as did the workings of the provincial producers’ organization. But he was a quick study and reached the point where he could put his forestry skills to work for other producers, often those operating on public land. Then, in 2018, after serious reflection and family discussion, he took over the regional presidency, replacing Sylvie Laliberté. “It wasn’t an easy decision. But I told myself that it wasn’t a lifetime contract. If I see something that doesn’t work, I want to get in there and fix it,” he says in his down-to-earth way. Motivated by challenge, he has pledged to continue the work of helping his region’s maple producers. 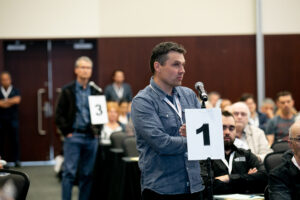 “As long as the maple industry continues to develop, so will my business. That motivates me every day!”