a man of action
Luc Goulet is the kind of guy who doesn’t like to watch a parade. He wants to be IN the parade. “Sure, you can be a spectator, but you could also be one of the organizers of it,” says Luc. This sums up his approach to being a full-time maple producer, an entrepreneur, and an administrator of our organization.

out of the classroom and back to the land
Maple syrup resides in the family heritage of both Luc and his wife Annie and, now, their three children. In 2007, after several years as an instructor in agriculture at Saint-Anselme, Luc and Annie bought a property with a quota of 4,000 taps at Saint-Nazaire-de-Dorchester, in their home region of Bellechasse. That went to the next level almost immediately. In their second production year, they were able to take advantage of an Expansion Quota. Érablière Annie Bilodeau et Luc Goulet now operates 17,000 taps. The challenges were stimulating, the results satisfying. “Starting a business, then seeing it grow… we’re very proud.”

doing it on their own
Luc tries to run the business “in-house” as much as possible. “It’s hard to hold on to qualified workers so we try to be self-sufficient at each stage of production. That way, we won’t be stuck if labour gets short.” It certainly helps that Annie earned her certificate in maple production soon after they started, and the kids contribute to operations, processing, and sales. At the end of the day, though, he appreciates the simple pleasures of the life they’ve chosen. “The best of all is just smelling the maple syrup as it boils. I love it.”

contributing to the industry
From the moment he became a maple producer, Luc knew he wanted to play a part in the movement, going to meetings and chosen as an alternate delegate for the Beauce region to the provincial General Assembly. The regions were reorganized, and he became administrator for the new Côte-du-Sud region, then its president in 2014. He is serious about the responsibility. 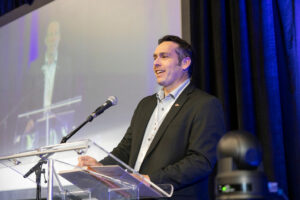 “I want to hear what producers have to say and to help them.”

talking with producers
That commitment propelled Luc to the QMSP Executive Council, on which he has served as 1st Vice-President, before becoming President in 2022. He could talk with you all day about the issues facing maple producers. He believes the way to progress lies through discussion with organization administrators like him. In fact, he loves visiting the various regions and hearing the word from the ground. “It’s important to know what’s going on with my fellow producers. I want to be able to represent them the best way I can.”