With or without his signature beard, Maurice Vigneault is always the same guy: cheerful, loves to talk, committed to the cause. And he thinks these are the kind of healthy, constructive characteristics that QMSP needs: “Let’s talk it over… it’s worth it!” says Maurice. 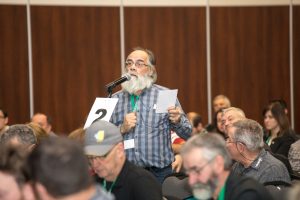 “For a guy with a big mouth like mine, dammit, I think I found the right place!”

A MAN OF THE LAND
Looking for Maurice? You’ll likely find him in the great outdoors. He’s a maple producer, a farmer, a gardener, a human at home in the forest and fresh air. He was one of those kids that chose being outside over school every time, especially at sugaring season when he’d be out with his dad on his 2,500-tap operation or on the dairy farm, which he bought to start his agriculture career.

FROM MILK TO MAPLE
Maurice caught a second wind in his forties. That’s when he and his wife Claire sold their dairy assets and bought woodlots that included stands of maple. “My passions were split two ways: agriculture and forestry. I left one for the other and took on a second career. Isn’t that the thing to do today…a second career at 43?” he jokes. The couple’s 17,000-tap maple enterprise sprawls over 500 acres of his own land, that of his brother, and public lands. Not that it came easy: “When they started giving quotas in 2003, I’d been in it for just three years. I built up my taps a little each year, from 4,000 to 7,000, then to 9,000. I ended up with a quota of only 1.5 pounds per tap. That’s not very much! It wasn’t easy,” remembers Maurice with more than a little emotion. “But I was able to get more quota over time.”

YOU CAN’T DO IT ALONE
“Getting people to work is complicated,” says Maurice. It’s one season at a time. “We look for new solutions every year.” This spring, the answers came from close to home when his daughter Hélène, son André, and a brother-in-law offered their support. “My daughter said she could help with tapping 2-3 hours a day if I got an Internet connection at the cabin, because she works remotely. She came out in February.” His wife Claire is a rock, in charge of administration. “She’s so patient,” adds Maurice appreciatively, “and determined and professional.”

PART OF THE ORGANIZATION – PART OF THE JOB
Maurice has a long track record in the maple movement. He was president of his area’s founding group, then president of the Lotbinière-Mégantic region (phased out in the 2012 shuffling of UPA’s agricultural regions), and has been administrator of the Syndicat des producteurs acéricoles du Centre-du-Québec for the past six years. Maurice says farmers and maple producers have an obligation to be involved. “A little group participation is part of the job in our line of work! When I work on behalf of our organizations, that’s what it is: I’m working.”