three girls and a sugar bush
In the picturesque Laurentian village of Saint-Alexis-des-Monts, Bianka Pagé dreamed of owning her own business. “I wasn’t really thinking about maple syrup but I thought it would be something related to food,” she recalls, as she took up studies in business administration. But it came to her one day and the smiling young lady with plenty of enthusiasm and determination enrolled in the maple production program at Saint-Anselme. “In that one year, I realized it was the right choice. I loved it!”

Before long, she and life partner Maxime were looking for land with maple potential and, in 2014, they bought a stand of trees in the Saint-Alexis-des-Monts area. But life, and love, have their ways of making decisions for you. “I thought we could start a business before having kids, but it happened pretty fast!” Bianka laughs. Now pregnant, “we decided to start the family first.” Three girls—Océane, Émy and Èva—became her first projects. L’Érablière Pagé, Savard et Filles came next. 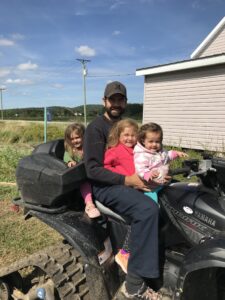 MAMA becomes a maple producer
Bianka applied for QMSP Young Entrepreneur Quotas twice with no success. Her persistence was rewarded on the third try, when she was granted the right to produce 4,000 taps. It was August 2018, and the girls were aged 3, 2, and 6 weeks. She and Maxime had to get to work fast in order to start producing within the program guidelines. “We did everything—built the cabin and set up the tubing system—in a year and a half, with the 3 girls right beside us. And then the first production year turns out to be 2020…in a pandemic.”

the challenges keep coming
As a young mother, Bianka has a set of adversities to overcome, some shared by most other maple producers, some not: lack of sleep, trying to find funding and good equipment, managing the forest, and, to her surprise, being accepted as a woman in the field. “It might not be a major challenge, but it is one. I’m the one who’s educated in maple production but many who knew that still preferred to speak to my boyfriend more than to me. It’s my business, my idea, and my spouse supports me completely.”

representing the new generation of maple producers
Bianka started going to QMSP information meetings as soon as she acquired her sugar bush in the fall of 2018 and got involved in the organization. “They had a position reserved for new producers. If not for that, I don’t think I would have gotten to be an administrator because I didn’t know enough about it.” And her role as administrator gives her the chance to meet other producers, to learn from them, and understand what’s behind the decisions they make.

“I’m very proud to represent the next generation. We have our own problems, whether it’s a new start-up or taking over a business. It often means major investment or having a young family or reconciling business and family. I want to be a voice for these realities.”

Above all, Bianka says she brings to the administrator position what she is: a woman. “We don’t have to talk louder than men. We may do it differently, but our way works too.”