As a boy, Francis Lessard couldn’t sleep on Friday nights. He laid awake, hoping that his parents’ friend from the neighbouring sugar bush would ask him to come spend the weekend. At this very young age, his passion for the forest and maple syrup was born and he remembers it today with a smile.

He was only 23 when he became a maple producer. The young man from Robertsonville in the municipality of Appalaches worked on farms and sawmills until, in the spring of 2008, he took over his own sugar bush operation at Saint-Jean-de-Brébeuf. First order of business: going back to school. Francis earned his certificate in maple production, not only to learn how to make syrup but how to start and run a business. “I didn’t have much money and I wanted to make sure every penny counted. That’s when I learned to prioritize investment.”

You’re a young man with 16,000 taps out in the bush and no business experience—try to convince a bank that you’re a good risk. Good luck. Time to talk to Dad. “My father was just two years from retirement and he needed convincing. Let’s just say that I’m a little bit stubborn. And he didn’t sleep well for a few weeks. Eventually he came onboard.”

A Man of the Forest

They say it’s not really work if you love what you do. And it seems that there’s nothing that Francis would rather be doing. A day without his chainsaw is a day without sunshine, to borrow a phrase. “For me, the new production year begins the moment everything is put away from the old year. Cutting and managing my woodlot, seeing the new trees coming up… I love it all.” He has the heart and soul for his work and he does it all alone, even during the production season.“In my new cabin, I made sure I had all the equipment and facilities to do it on my own,” he says humbly. “If there’s anybody who offers to help, I’m sure I can find something for them to do.” 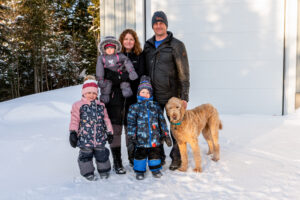 Growing a Family and an Organization

Francis and wife Catherine are the happy parents of three children aged 10 months to 4 years, with a fourth on the way! As busy as that makes him, he’s been involved in the maple movement since the very beginning in 2008. After a few years, he became local chapter president, a position he’s held since 2016. His own story is his prime motivation in helping young people get all the information they need to get started in agriculture and maple production.

“My ambition is to bring my own experience to the table, to help smooth the edges for young entrepreneurs as they try to get started. I’ve been there. I’d like it to be less difficult for them.”