For Guy Breault, it’s been a country life, all his life. “My family lived on the south side of rang Kildare and my uncle had a sugar bush on the north side. At sugaring time, I crossed the road all the time to help him out,” he recalls with pleasure.

TRADING THE MILK PAIL FOR THE SYRUP PAIL

Guy became a maple producer in 1988, taking over from his uncle as the 7th generation of Breaults to work the very 4,000 tap operation that he helped on as a kid. Guy continued to run the dairy farm until 2003, when maple quotas were introduced. “After a few difficult years in dairy, I decided to trade the herd and milk quota for maple syrup.” In addition to the 4,000 taps at Rawdon, he invested in 25,000 more at Notre-Dame-de-la-Merci.

“At the end of the 1980s, a gallon of maple syrup sold for 20 bucks. My wife and I decided to get all the training we could to add value to our syrup,” explains Guy. With prices low and less than stable, Guy and Guylaine moved into processing and selling direct to consumers. They rigged up a mobile sugar shack and drove it all over the Laurentians and Lanaudière, demonstrating how maple syrup is made and offered tastings and products for sale. “We even went to the Botanical Garden and did crickets dipped in maple taffy,” he says, himself amazed by the adventure.

As time went by and his maple products gained popularity, Guy built his own processing facility to meet the growing demand. “At first, we were doing it all at home: cooking in the kitchen, washing in the bathroom, packaging in the living room. Let’s just say that, in springtime, the house was pretty sticky,” he laughs. Processing maple products became the core of their business model, so much so that the couple started giving courses to other producers. Guylaine even became a judge at international competitions.

THE NEXT GENERATION HAS ARRIVED

Father of four and grandfather of five, Guy is thrilled to have son Guillaume, since 2017, working at his side. A third Breault offspring has gone off to become a maple producer on his own. “My son and daughter-in-law have taken over the processing end. Guylaine and I taught them everything we know. It’s up to them to do it their way,” says Guy with pride.

OVER 40 YEARS OF service TO agricultURE

Guy has always given of himself to the farming community: since coming of age, he’s represented the next generation of maple producers and subsequently became involved in his local chapter and the region’s business groups. Now 18 years in the maple movement (the last five as local president), he’s shown a deep desire to work for the collective good. 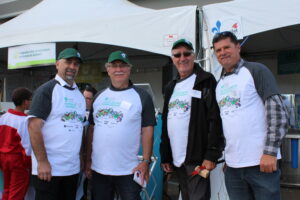 “I have always spoken my mind for equity in the maple industry but also for processors.”

Guy is well aware that his ideas may not be accepted from the start. But his extensive experience in the movement lends a considered view of the issues. “As my former president Rolland used to say, you plant a seed, water it a bit, and watch it grow. It doesn’t take long!”