Qui prend mari, prend pays is an old Québec proverb that has its English equivalent in the “for better or for worse” of traditional wedding vows. It’s what Lucie Bolduc says when she explains how she became a maple producer, meeting Charles Perreault in 1990, and marrying him… along with the 26,000 taps on his family’s sugar bush. Ever since, they operate Érablière Perreault together, near the Beauce village of Frampton.

To Each His (and Her) Own

Lucie left her office job in 2009 and took up the maple industry full-time, she and Charles becoming equal partners of the incorporated business. That doesn’t mean they do the same things. While he performs the bush work, it’s Lucie who takes care of the back end, from processing to managing the business and customer service. “I’m no less a maple producer just because I’m not tapping the trees. I love working in the office and selling to customers.” 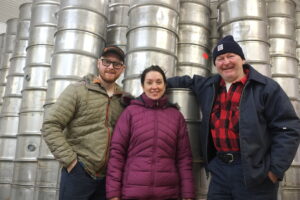 The Perreault family started making maple syrup way back in 1902 and it looks like they’ll be doing it for years to come. Their daughters Anna and Hilary (ages 20 and 23) handle the social media responsibilities and act as “official tasters”. Their big brother Frank (25) works full-time with their parents. The next generation appears to be onboard. “That door is open to them all,” says Lucie.

For the Love of Maple Syrup

Lucie can talk about maple products all day long, making her a natural for the customer service end of the business. In fact, Érablière Perreault specializes in retail sales and syrup for processing. She believes maple syrup can be used for everything. Her favourite guilty pleasure is warm taffy on ice cream. “It’s like taffy on the snow. There’s nothing better.”

In October 2020, Lucie was elected administrator of the QMSP chapter in Appalaches-Beauce-Lotbinière. With the support of her husband and other maple producers, she sees it as a new adventure, “I don’t think I’ll reinvent the wheel, but I can make a difference. I’m going to approach it with what I know and what I love to do.” And she sees it as an opportunity for the men around her, to see what a woman can bring to the role.

“Often, women don’t want to get involved, leaving it up to their husbands. I want to show that we can have good ideas, too.”

So far, in the midst of the pandemic, she’s only been able to do that virtually. Luckily, that also works, with her chatty personality and sense of humour. “But I can’t wait to meet the gentlemen in person!”