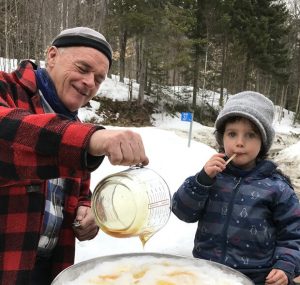 Normand Foisy has been steeped in maple syrup since childhood. His is a maple family, his dad from the era when horses hauled the sap to the boiler. After passing on the family dairy farm to his sons in the late 1970s, Normand’s father took up maple full-time. By then, production equipment was modernizing, including the use of tubing systems to do the job formerly performed by horses, sleds, and barrels.

In 1998, it was Normand’s turn to become a full-time maple producer, inheriting his dad’s operation and respect for the forest. “A maple producer has to be proud of his trees,” he says. With 4,000 taps to manage, he has the support of his family, including a son who by his side at sugaring time. The Foisy clan produces maple syrup in bulk and sells directly to consumers.

Normand joined the greater maple movement in the mid-1990s when fellow producers in Outaouais-Laurentides urged him to take on the presidency of the region. “For me, it’s the democratic foundations that attract me most,” he declares with enthusiasm.

“With UPA and QMSP, everybody speaks their minds and the decisions are made by us, the producers.”

Normand was there for many significant moments in the maple movement over the past 20 years: the debates over the marketing agreement, the creation of the strategic reserve, and the advent of production quotas. To his mind though, QMSP’s investments in scientific research are of paramount importance as they’ve brought enormous changes to the industry. Maple production has taken giant steps in recent decades, thanks in large part to the advances in products and production made possible by research.

One of the greatest moments of all, according to Normand, was when maple producers stood together against the recommendations of the Gagné report which threatened the collective marketing system. That show of solidarity protected the livelihoods of the many people who depend on the system built by QMSP.

Normand Foisy is proud whenever he sees a producer get involved in the movement for the first time. To those who hesitate to do so, he has this to say: “Don’t worry about displacing anybody. We can’t afford to do it without you. So step up!” Normand stepped up more than 20 years ago and has been making his voice heard for the benefit of all producers ever since.