Serge Beaulieu came to love maple from… milking cows. “In 1980, my father and I bought a little dairy operation. The farm came with a sugar shack and 800 taps. My brother and I thought it was perfect for weekend parties,” he recalls with a laugh. “The shack had a dirt floor. It was nothing but a throw-in with the dairy business.”

But, by a couple of spring seasons later, the two brothers were really getting interested in maple production. “We were hooked!” is how Mr. Beaulieu puts it, his brother joined the business in 1982, and they got work on upgrading it. “In 1984, we installed tubing and, in 1985, we bought the neighbour’s sugar bush. Then we put in electricity.” Today, the maple syrup and dairy businesses earn the same net income, and support 4 families.

A few years later, Mr. Beaulieu began (almost by accident) his involvement in the maple syrup movement. In 1989, with nobody to serve as president in the region, fellow producers urged him to take it on, at least until the joint plan came to a vote. “I said ok but please find somebody else afterwards.” But Serge Beaulieu never left. “When you love what you’re doing, you keep doing it. But, if somebody had told me then that one day I’d be president of QMSP and have my own business with 30,000 taps, I wouldn’t have believed it!”

In 2022, Serge Beaulieu resigned from the QMSP presidency, after 14 years at the post. 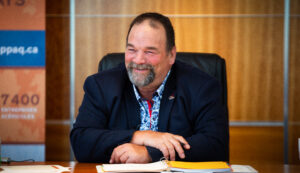 “I want to move maple producers forward. We’ve given ourselves a structure that maximizes producer revenues over the long term so they can make a living doing what they love. That motivates me.”

As president, he drives 35,000 to 40,000 km across Québec… every year. He does this to talk with producers and answer their questions. “For me, it’s important to stay close. When they need information, I have to be able to give it to them,” he explains. His wife says the phone is his best friend!

Serge Beaulieu divides his time between being president and running his own business. “I work at least 80 hours a week, but I don’t even notice. I love what I do.”