Nestled in a dream location—between a lake and a mountain, Érablière du Lac Saint-Hubert is a dream come true for Nancy and husband Richard. Whenever the couple from Saint-Hubert-de-Rivière-du-Loup saw the mountain off in the distance, they’d tell their kids, “One day, the sugar bush there will be ours!” When it went up for sale in the fall of 2012, they snapped it up and became the owners of a maple operation that now has 22,500 taps. Along the way, their knowledge and passion has only grown.

up to the challenge

It takes courage to start a new business and the two new maple producers had it, along with a supportive family and their three teenagers. There was a lot of work to do before they could get on with their first sugaring time in 2013. They hooked up pumping stations to the electricity, carved out new roads, and replaced all the tubing. Only Nancy worked full-time for the first few years, as Richard continued his job as a forestry machine operator. Quite the change for a stay-at-home mother, but Nancy is a determined woman, and the couple enrolled in maple production courses at Saint-Anselme. That was a 450-kilometre round trip… every day! “We were getting home at midnight, then getting up in the morning to go back,” says Nancy. “We just wanted to get better at what we were doing.” 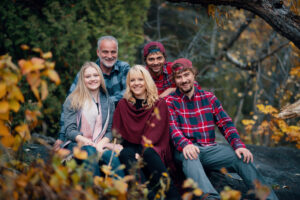 “My main goal is to be happy, to enjoy what I do, and to be with my family.” (The children—Luc, Maxime, and Jessica—are now adults.) And joy is what you see in her laughing eyes when Nancy talks about her workday, and how it’s filled with little pleasures. She loves the peace and quiet of the forest in the morning when she’s thawing the master lines, or going out to fix leaks on her snowshoes, or taking time out for a picnic under the trees with a friend and employee. Her favourite time of all is about 4 in the afternoon: time to boil. “It smells like happiness to me. I always gain a few pounds in spring because I can’t resist a taste of hot syrup!”

taking her seat at the table

Nancy had been a maple producer for just a year when she took the plunge and became an administrator for her region. She had the support of her husband and the encouragement of the previous administrator, as well as the inspiration of Sylvie Laliberté, the regional president at the time. She hopes that she is setting an example for women that follow her into the maple business and does it in the belief that different points of view are good for the organization. Besides, women make up a not-insignificant portion of experienced maple producers.

Any final words of advice, Nancy? “We’re not better than the men, but we’re not worse either!” she laughs. 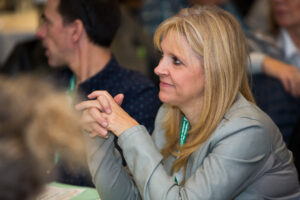 “At first, I was a bit afraid that I didn’t know enough, but that turned out not to be true. Talking with other producers, I soon realized that I had as much to say about the business as they did.”