When Régis Boutin is surrounded by trees, he’s in his element. His love of the forest was handed down to him by his father who, one day, told Régis he hoped that he would follow in his footsteps as the owner of his own sugar bush.

The dream started to take shape in 1987 when he and his dad bought a 2,500-tap sugar bush at Saint-Georges, in the Beauce region. Régis was working as a logger. “When the camps broke in the spring, I had a reason to be in the bush a bit longer. I love the forest, the fresh air, and the good taste of syrup. Life’s pretty good!” He stayed in the logging business until 2016.

the torch is passed
In 1993, Régis and life partner Suzette Rodrigue bought a 7,500-tap bush from a neighbour. Within ten years, they acquired two more local operations to expand their production to 18,500 taps.

When Régis’s father died, he left him a share of his sugar bush. But much more than that. There’s more than a little emotion in Régis’s voice when he talks about what a privilege it was to work with his dad. “He was 86 when he died and was still going out to the sugar bush every day. He loved it! It was amazing to share that with him. And to learn from him. We always talked about things. It was so much fun!”

the torch passes again
Fathers often dream of their children taking up the family tradition, and Régis’s father saw it come true. But, just as often, the dream does not come true and this is the case for Régis, as his three sons took other paths in their lives. Coming to terms with that, he and Suzette are in the process of passing on the business to a valued employee. “He’s really motivated. I never had any worries about him. I’d leave him the keys to the cabin and know everything would be fine.”

informed and organized
Régis took his seat as an administrator for the Beauce region some five years ago. Before that, as simply a producer, he made it a point to be at all the regional meetings. He says it’s important to understand what’s going on in the industry and the reasons for decisions. “People speak their minds, we come to good decisions, and we move forward.”

With what might be described as quiet strength, Régis speaks of the necessity to take care of business, at some point in your life. If it takes time, it’s worth it. 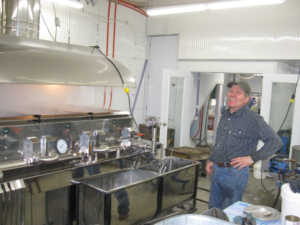 “I see myself as aware of what’s going on, so I’m able to take part in deciding which way things will go. This is our business and producers should have a say in the decisions!”