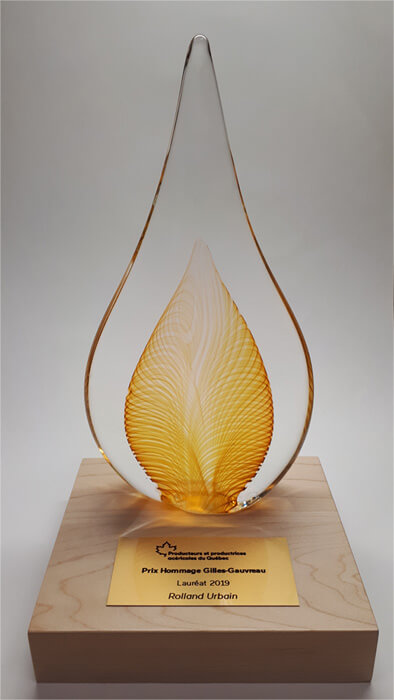 Gilles Gauvreau was our president from 1975 to 1989. He worked tirelessly to achieve a better future for his fellow maple producers. In tribute, Québec Maple Syrup Producers (QMSP) established the Prix Hommage Gilles-Gauvreau, the first and only award in Québec that honours the men and women who emulate his efforts to advance our industry.

Since 2012, the Gilles Gauvreau award has gone each year to a maple producer who has demonstrated exceptional dedication to our organization and, through action, contributed to the success of the industry here and abroad.

This trophy was created in 2019 by glasswork artist Jean-Simon Trottier.
It was hot-sculpted with amber filigree to reflect the fire, passion, and pride of our maple producers.

Recipients of the Prix Hommage
Gilles-Gauvreau:

Rolland Urbain (d. 2018) was a great champion of the maple profession. His actions reflected his profound beliefs in life and the forest.

Mr. Urbain was elected administrator of the Lanaudière region in 1988, and its president in 1995. His 30-year career saw the implementation of the joint plan, the quota system, and the strategic reserve. He gave everything he had during our greatest times of struggle. 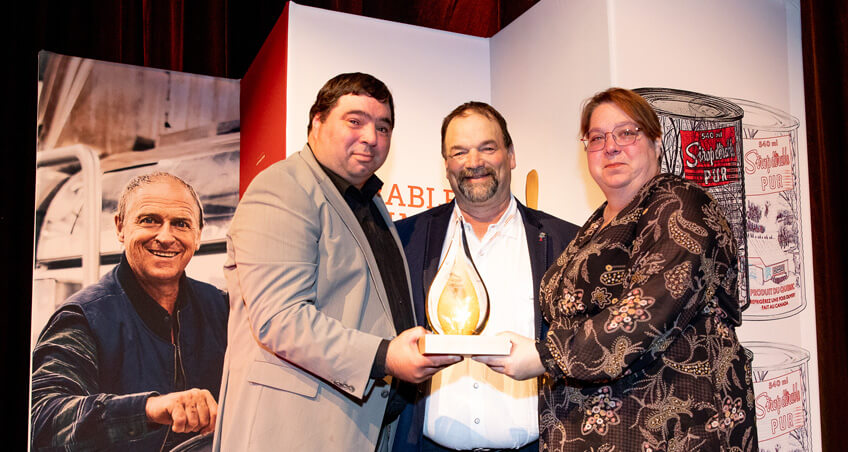 Gérald Morin became an agriculture activist in 1985. Over 31 years, he took on several challenges, including that of regional administrator for Lotbinière-Mégantic and Chaudière-Appalaches for 10 years.

In 2005, Mr. Morin became president of the Québec City region. When the regions wer reorganized in 2013, he assumed the presidency of Appalaches-Beauce-Lotbinière. He was on the provincial Board of Directors for 11 years, 6 on the Executive Committee, and 1 as first vice-president.

Mr. Morin fought body and soul for the implementation and protection of the marketing system we know today. He served on committees, from quotas and public lands to marketing and promotion. His proudest accomplishment was sourcing the building in Laurierville that, to this day, is our plant and warehouse. 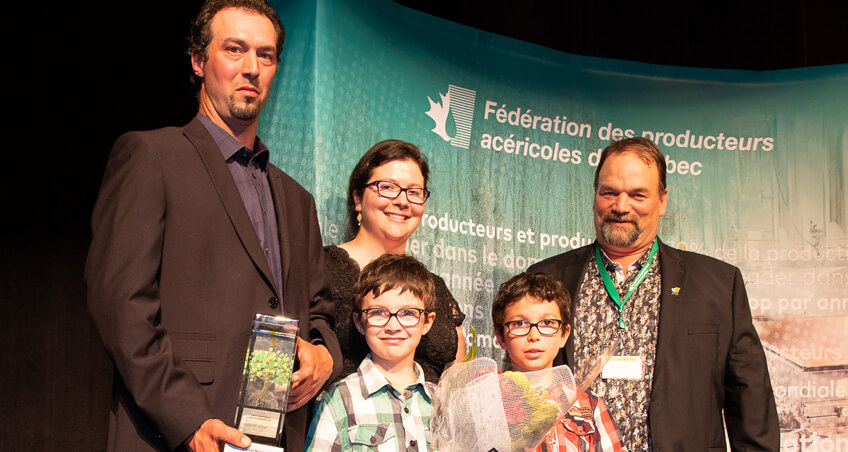 Angelo Trépanier produced maple syrup for more than 50 years at Saint-Thècle, west of Québec City. He served on the Board of Directors of the Citadelle cooperative for 20 years, as well as administrator for the Mauricie region in the early 2000s.

In addition to his contributions to the cooperative movement, Mr. Trépanier is recognized for his ardent advocacy of maple syrup quality, spending some 4,000 hours training other producers on the subject across Québec. Named Master Producer 4 times, he went on to serve as a judge at the annual competition on several occasions. He has been a leading light in our association’s standards for the inspection and quality assurance of maple products.

He made his mark in innovation, exploring the concept of autumn maple syrup production that would respect the health of trees and the impact it would have on spring production. His work earned the Mérite forestier de la Mauricie–Bois-Francs.

In addition to his contributions to maple syrup quality and intelligent forest management, Mr. Trépanier is a renowned collector of mechanical saws. He owns more than 400 of them!

Léonard Lampron (d. 2013) was president of the Mauricie region and an administrator for the provincial federation from 1981 to 1998. He founded the Syndicat des producteurs de sucre et sirop d’érable to defend the rights of maple producers in the Mauricie and contributed to the first joint plan. While this was rejected in 1984, it laid the groundwork for our current plan.

Mr. Lampron and his administration introduced the first voluntary dues. His work contributed to the creation of a producer-managed syrup bank, precursor to today’s Global Strategic Reserve. He also had a significant impact on consumer sales of maple syrup with the introduction of an annual list of suggested retail prices.

In the wake of several difficult years for maple producers, he led the way to a regional joint plan in the Mauricie. This was a significant contribution to 1989, when 84% of Québec producers voted in favour of the federation’s joint plan proposal. 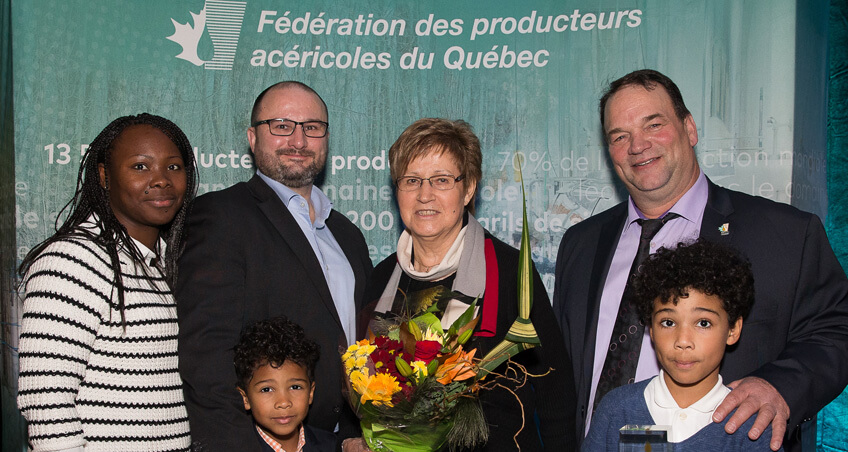 Léo Blais is one of the Québec Maple Syrup Producers organization’s builders, having been involved in all its major projects of the past 50 years. A maple producer from the Estrie region, Mr. Blais devoted an enormous amount of time and energy to initiatives including government loans for the acquisition of farms, federal financing for horticultural and maple production, creation of the Estrie cooperative, the defense of producers selling to Steinberg, the formaldehyde issue, the management of maple operations on public lands and, of course, the joint plan.

Léo Blais was there for the creation of the first syrup bank in 1988. He was one of the 10 signatories, along with Gilles Gauvreau, of the September 7, 1989 application for the joint plan with the Régie des marchés agricoles et alimentaires du Québec.

Jean-Claude Ouellet is a man of passion, well-known for being an outspoken yet unifying force. He spent a large part of his life working for the Syndicat des producteurs acéricoles du Bas-Saint-Laurent, a career distinguished by his determination and profound belief in cooperatives.

Mr. Ouellet’s accomplishments include improvements to the collective marketing system and an ongoing concern for its effectiveness. He was one of the founders of the joint plan and sales agency, and one of the greatest promoters of the industry in Québec. His remarkable devotion and contributions have an indelible mark on what we do today.

Pierre Lemieux was one of the main players in the quasi-revolution in the marketing of maple syrup, if not the foremost player. He was there in 1998 for the first marketing agreement, the creation of the Strategic Reserve in 2000, the Sales Agency and the $100 Million line of credit to pay producers in 2002, and the quota system in 2003.

This is a peerless list of accomplishments, but it does not end there. Mr. Lemieux advocated for research and promotion to further the development of maple production. He had an uncanny vision of the future, coupled with amazing perseverance, elected president of his region in 1989 and serving as provincial president from 1992 to 2007.

There was only one Gilles Gauvreau, he was president of the Fédération des producteurs acéricoles du Québec from 1975 to 1988.

Mr. Gauvreau undertook his duties to our industry in 1962 when he became president of the Syndicat des producteurs de sucre et sirop d’érable in the Nicolet region. He simultaneously oversaw the same organization in Princeville from 1963 to 1979 and served on committees for the UPA in the Centre-du-Québec region until 2001.

What distinguishes Gilles Gauvreau was his unswerving dedication to the cause, regardless of gains or setbacks, over so many years. He was a staunch believer in cooperation, believing in the possible and pursuing it with passion and integrity.

The award in his honour, the Hommage Gilles-Gauvreau, was presented for the first time at the provincial AGM in 2012. He was the recipient. 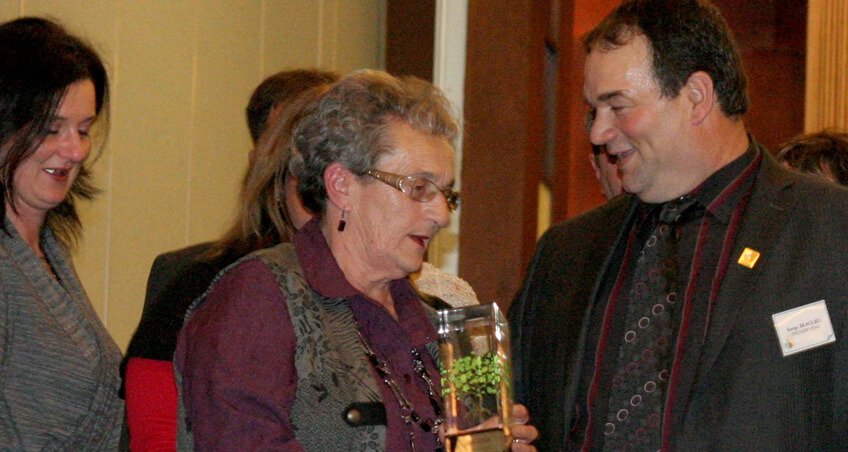