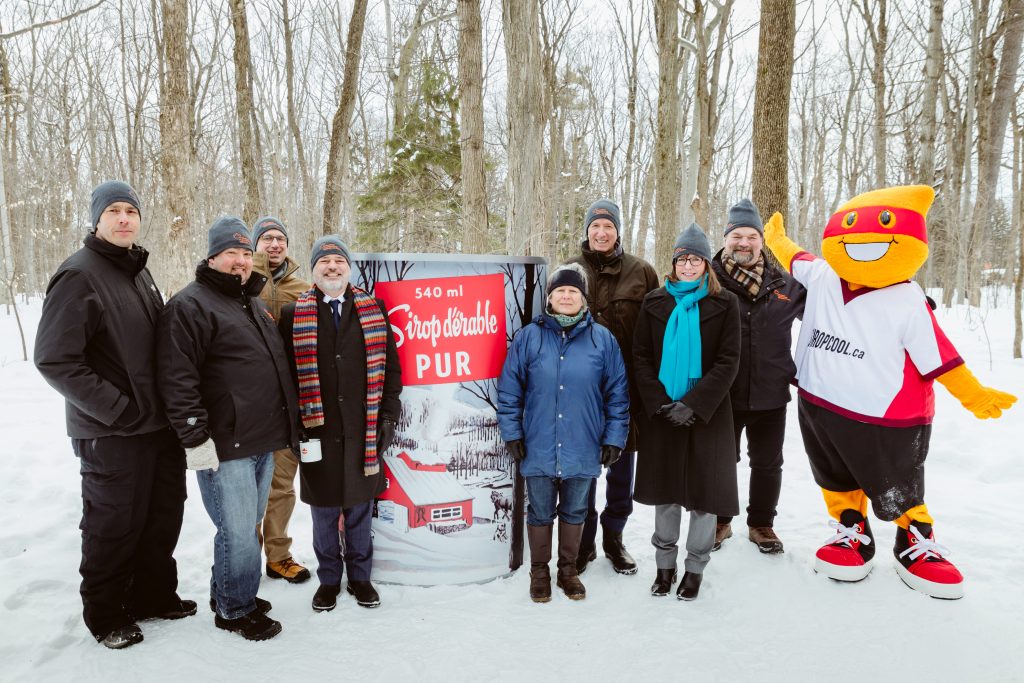 100 years of maple production in Quebec

The maple tapping ceremony, an annual industry tradition that officially kicks off the sugaring-off season, took on a festive air yesterday morning February 18 at the sugar bush in Quebec City’s Bois-de-Coulonge Park as attendees celebrated the 30th anniversary of the joint plan for maple production. André Lamontagne, the Quebec Minister of Agriculture, Fisheries and Food,  took part in the tapping ceremony along with a number of provincial MPs. QMSP representatives also took the opportunity to launch the book Si l’érable m’était conté, which recounts 100 years of maple production history in Quebec.

2020 marks the 30th anniversary of the creation of the joint plan for maple production. To mark the occasion, the Quebec Maple Syrup Producers wanted to tell their story and share a part of the province’s heritage with as many people as possible. That’s how the book, Si l’érable m’était conté : 1920 – 2020, 100 ans d’acériculture au Québec, came to be. Serge Beaulieu, who has been QMSP President since 2007 and was involved in the industry in 1989 when the joint plan was created, had this to say: “Becoming a full-time maple syrup producer and making it your profession was almost impossible to imagine from the 1950s up to the 1980s. But now in 2020, maple syrup has become the main type of agricultural production in many regions in Quebec. Today, maple syrup production translates to 10,000 full-time jobs and $600 million for the Quebec economy. The collective effort of the 11,300 maple syrup producers across the board has made it possible to create a stable environment in which the maple syrup industry can flourish. Our organization was born out of a desire shared by many to grow this once-ancillary production business into an economic sector in its own right. Our predecessors believed—and we still believe today—that when we all work together to move forward collectively, we get a lot farther.”

André Lamontagne, drill in hand, had the honor of officially tapping the maple tree this morning. “Maple syrup is a key ingredient of Québec’s cultural and culinary identity,” said the minister. “The book that was launched today makes it clear just how ingrained this product is in our collective psyche and in Québec’s heritage. This liquid gold is an invaluable resource produced only in northeastern North America and particularly in Québec, which accounts for 90% of Canada’s maple syrup and 70% of the world’s supply. We are well aware of the major role the industry plays in our economy and the expertise of Québec’s maple syrup producers is a point of national pride”.

A hot maple mocktail was served and everyone toasted to the 2020 season, which, depending on the temperature, should begin in the next few days in more southern regions and a little later in the regions further east and north of the St. Lawrence River.